Tasty Talks and Thando Eats come together for a unique fusion concept.

When Nothando and I met for the first time, we had a rather comforting conversation and felt connected on various levels. I guess it had to do with the fact that we come from similar cultures.

I am from Delhi and Nothando from Johannesburg. The moment I saw her food pictures on Instagram, I fell in love with the sheer beauty and details of her plating. ‘It would be an honor to have her on the Tasty Talks platform’- I thought to myself. When I reached out to her, she was pleasantly open to meet and collaborate and what was even better was she was moving closer to my home. This was in the middle of the pandemic, when things at Tasty Talks were changing and evolving rapidly and continuously.

Fast forward to May 2021 and a few meetings and dialogues later, we finally got together to blend our cooking styles and heritage. We are both very proud of our rich cultures, large families, and social fabrics. And we wanted to create something that could capture the essence of our dynamic culinary heritage. We started talking and ideas kept floating and then she suddenly mentioned Bunny Chow.

While she was describing Bunny chow to me, it sounded a lot like a close cousin of Paav Bhaji. I looked it up on the internet and I immediately messaged Nothando telling her –‘Hey! It’s actually a south African version of Paav Bhaji 😉’. If I think about it, this was our starting point and the ‘AHA’ moment when we felt that something really close to our hearts and quite unique was to come out of this fusion. 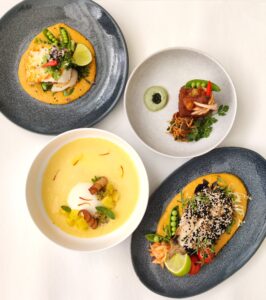 I had recently discovered an Indian dish with baby brinjals- “Bagare Baingan” prepared by my sister-in-Law who comes from Hyderabad. I fell in love with the flavors. I have to admit that I have a newfound respect for the versatility of Eggplant as an ingredient in cooking. Back in India, I wouldn’t consume a lot of Eggplant. After moving to Europe though, I discovered how loved and extensively used this vegetable was.

What followed was a combination of the Bagare baingan gravy(curry) with Nothando’s techniques of braising and smoking fish and eggplant. The depth of roasted peanut and subtlety of coconut combined with spices forms a stunning ochre bed for slow cooked Eggplant and fish. It was a treat for a person like me who loves all things beautiful and decorated, to watch Nothando adorn the dish with elements, dimensions and layers of vegetables, greens and sesame. For me, watching her work is strikingly similar to visuals of scientists in their labs exhibiting precision, practice and perfection.

That the Panna cotta is a very common dessert in South Africa was a surprise for me. I always knew of it as the delicacy enjoyed in Europe, originating from Italy. After various ideas and combinations, when we finally settled on mango lassi Panna Cotta, we both had visuals of what we would like the dessert to look like. Rose petals, edible flowers, saffron, nuts… it was hard to decide on what would bring it closer to our imagination. What we do finally is for everyone to experience and see in our dinners. It changes.

The purpose of me writing this piece describing our process of designing, deconstructing and reconstructing dishes is to share the passion and love we have for our food in our hearts. We wanted to collaborate in a true way and we have been fortunate to have similar minds that think alike and believe in the power of collaboration.

Our fusion dinners and the way we approach them come from a place of deep respect for our and each other’s heritage.

When people of Netherlands and travelers from others part of the world come and experience it, we want them to go back feeling rich with taste, hospitality, knowledge and surprises. Right in the heart of Badhoevedorp, in Nothando’s cozy home restaurant, we bring people together through love of food.