A lot of the Indian cuisine has its roots in middle eastern cooking.

A look at Northern Indian and Iranian faces is enough to suggest similarities between the two cultures. India and Iran have been influenced by each other historically architecturally and have passed on culinary treasures to each other.

A lot of the Indian cuisine has its roots in middle eastern cooking.

Take the beloved samosa, for example! The samosa originated in the Middle East and Central Asia. It then spread to Africa, Southeast Asia, South Asia, and elsewhere. The term samosa and its variants cover a family of pastries and dumplings popular from north-eastern Africa to western China. The samosa spread to the Indian subcontinent, alongside the spread of Islam, during Muslim rule in the region. A praise of samosa (as sanbusaj) can be found in a 9th-century poem by the Persian poet Ishaq al-Mawsili. In Iran, the dish was popular until the 16th century. Abolfazl Beyhaqi (995-1077), an Iranian historian, mentioned it in his history, Tarikh-e Beyhaghi. Recipes for Samosa were part of the 15th Century Persian manuscripts from “Niyamat Namah” which is a colourful illustrated book on many royal foods. Samosa entered the mainstream Indian cuisine with the establishment of British, who also seemed to love the spicy dish. As the Portuguese introduced Potato to India in 17th Century, it later became a key ingredient of samosa replacing Meat, especially for vegetarians in India. In today’s time, a samosa seller is found in almost every neighbourhood in India, who tosses Samosas fresh out of the oil for buyers, packs them in a paper bag and people take it away to enjoy it with their families in the mornings or evenings.

Yet another popular dish, that is considered Indian and is famous worldwide is the Biryani. But it has its roots in Persia. In Iran, Biryani is a commonly prepared meal too. 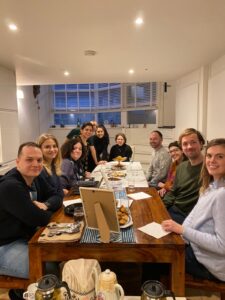 Other than the influences of specific dishes, the cooking techniques and ingredients used in the 2 countries are also quite similar.

What’s interesting to see is how these cuisines are blended together to showcase a hearty and holistic mix of India and Iran on the plate.

Through our Persian Indian fusion dinners, we try to bring to people a nice blend of the two culinary treasures. Think – an Indian style samosa with a Mast -o- esfenaj, Persian style rice with an Indian biryani twist and Persian Orange cake served with Pista kulfi are the kind of fusions we do in our Persian Indian dinners together with Parisa’s Persian kitchen!